I wished for snow since the last couple of times we’ve been down in November (same time of year), there wasn’t any. And that’s where the not always good comes in. As in, be careful what you wish for; you might get it.

We left home in a snowstorm and drove the entire way in the blizzard. See where I’m going? The drive was longer than usual and in less than perfect conditions. Ugh. But, I did wish for snow.

I don’t like driving at night anymore, and by the time we got there, it was pitch black. The clouds and shiny pavement in the city made it even worse.

Because of the hour and the fact we’d left a couple of things behind, our first night was a quick trip to the pharmacy for distilled water for hubby’s CPAP machine and across the street to Mary’s Popcorn for some munchies for later in the evening. The variety of flavours is amazing!

The sidewalks were snow covered and slippery in places, so when it was time to go for supper, we only walked to the end of the block to the St. Hubert. Their chicken and ribs are great. 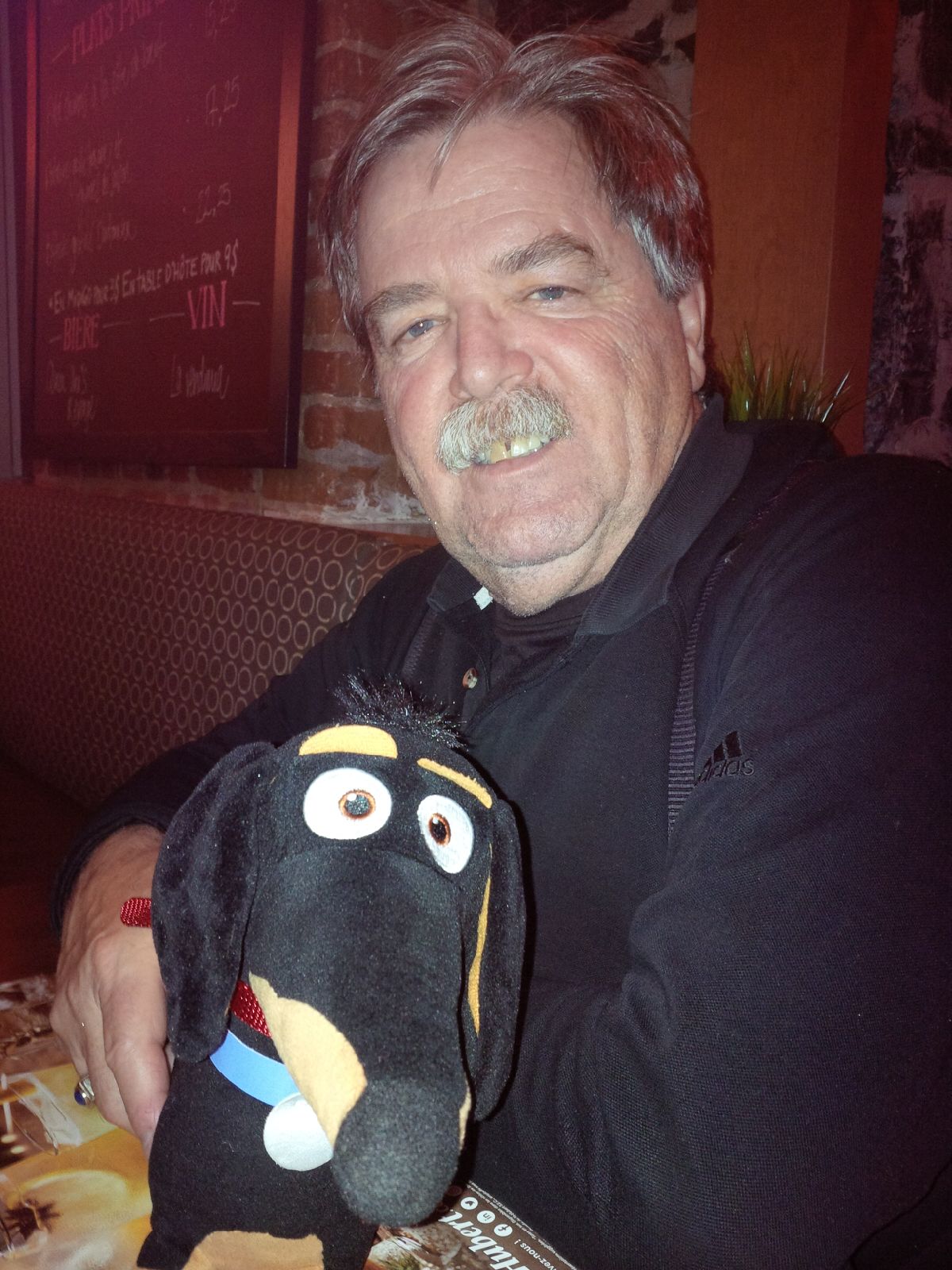 Our wee hound accompanied us on this trip, too. Maybe his wishes came true? And before you ask, he was very well behaved in the restaurant.

Because I got what I wished for, the trip wouldn’t start in earnest until the following day.

We woke to another day of sunshine. Since we were close to the sea, I thought it would be nice to drive along the coast of the Moray Firth for at least part of our journey.

Being the stinker that I can be (I know I hear you saying – “You? Never”) I really wanted to go through Cullen. Travelling from west to east, the 90 degree corner at the bottom of the hill isn’t so intimidating. When we were over in 1997, we came through Cullen from the opposite direction, my husband behind the wheel. After the sharp corner at the bottom of the hill after passing under the railway viaduct, he swore off driving in Scotland for good.

Can you imagine how loud the noise from the train would have been in these houses? How about the shaking every time a train went through? The little white one has a small gate separating it from the viaduct but the one across the street is attached.

Since we were so close to Ladysbridge (the site of the former asylum that I used in my novel, A Shadow in the Past) we drove by it to see if the two boarded up, almost derelict houses had been refurbished. Nothing had been done to either one of them, but two brand new houses now stood in between them. And the old school building on the opposite side of the street to the main asylum (now luxury flats) was in the process of being pulled down.

After seeing Ladysbridge, we headed off to Orbs Bookshop in Huntly. The lady who used to run the shop contacted me in Sept 2013 about getting copies of A Shadow in the Past after I’d returned home (timing is everything, eh?) so I reached out before this trip and arranged to drop copies my novel off and the possibility of a signing. Anyway, the two books the shop could definitely purchase were signed and the transaction completed. We also volunteered our friends who lived nearby to keep the remaining books and take them to Huntly as and when required.

While there, another woman came in. She was involved with the MacMillan Cancer Support organization so I signed and donated a copy to the cause.

While we were at the castle at the top of the tower on the left side of the photo above, we met a couple from Belgium. She immediately noticed that she and my husband both wore the same trainers. Obviously, that brand is known world-wide. Anyway, we had a great conversation with them before going our separate ways.

Since we couldn’t bring home our bottle of 18-year old Cardhu on our last trip, we went back to Knockando where the distillery is located. The plan was to cut across the A920. There was a diversion sign on the A96 just before the intersection but the grass was long enough that we couldn’t see exactly where it was on the road we planned on taking. We got most of the way across when the road was totally closed. Mind you we’d met a fair amount of traffic so didn’t give it much thought… until we came to the construction site and the hole in the road. A slight backtrack and across a single track road, and into familiar territory thanks to the diversion because we drove by Fernbank House B&B where we had stayed in 2013.

Our bottle of Cardhu safely in hand  and toilets used at the distillery we were ready to drive to Kennethmont. In addition to the diversion due to the closure on the A920, there was also roadworks at Dufftown. To avoid this, we took the A95 to Keith where we hooked up with the A96 which would take us to Huntly.

We made a quick stop at Tesco for supplies – champagne (to toast our friends’ 30th wedding anniversary and our 40th), wine, something for supper, and a pay as you go sim card with top-up card for my unlocked iPhone.

It must have been roadworks season because when we got the B9002 that would take us to Kennethmont, it was closed at the end where it joined the A97. Luckily, there was another road that would take us past the closure without having to go way our of our way.

We spent an enjoyable evening with our friends, drank one of the two bottles of champagne (deciding to keep the second one for our last night with them).

Inverness to Nairn isn’t much distance wise, if you were to go straight there and back but we rarely do anything in a direct route when we’re on vacation.

Our first stop this morning was to see the sixteen men of Tain at the Glenmorangie Distillery after a few photo ops along the way.

Unfortunately, they were fully booked for tours because of two cruise ships. But we were each given a free dram of the amber nectar (not that I could drink mine because I was driving but I did let it touch my lips and had a wee sip).

We bought a bottle to take to Kennethmont for our stay there along with a couple of other things from the gift shop before heading off to see Hilton of Cadboll stone.

Before making our way back to the main road, we found ourselves on another single track road and at the Shandwick Stone which is under glass to protect it from the elements.

We headed back towards the Dornoch Firth for a stop at the Tarbat Discovery Centre at Portmahomack.

Now that our thirst for sculptured Pictish stones had been temporarily quenched, we got back on the road. We weren’t the only ones who had a thirst needing quenched. Our car wanted petrol (not to the point we were on fumes or anything) so we drove into Invergordon to fill up. The two cruise ships that we had been told about at the distillery were docked here and the passengers were being shuttled by bus to Glenmorangie. Those who weren’t wandered about aimlessly like cattle.

Another reason we stopped here was on our way up, we had seen lots of rigs in the water and this put us right along the Cromarty Firth where we could get a good look.

Next stop was Fortrose Cathedral. Not as impressive as some of the ones we’ve visited over the years but filled with history and interesting artefacts.

Fort George is almost directly across the Moray Firth from Fortrose but because there is no bridge, you have to double back to the main A9 road bridge. The fort is also a working military base so there are places where you can’t go. It reminds me a lot of The Citadelle in Quebec City.

It was late when we arrived here so we didn’t have a lot of time to explore but we did see the highlights (as suggested by Historic Scotland).

Cawdor House B&B was our destination for the night. Aside from street parking only, it was a lovely place. Our room was enormous! 4-poster bed, daybed and leather sofa and a spacious en-suite bathroom.

Our hosts suggested a restaurant where we could have our evening meal that was within walking distance. That meant I could have a drink, too.

This morning we were greeted with blue sky and a rainbow – a vast improvement over yesterday’s pouring rain.

The first leg of our journey was from Oban to Glenfinnan – the monument and the viaduct.

At one time we were members of the National Trust for Scotland which gave us free entry to their properties but we let it lapse when my mum got sick and it looked like we wouldn’t be travelling abroad for quite some time. We could have climbed to the top of the monument for a fee but seeing it and Loch Shiel were more than enough.

The other thing we wanted to do in the area was walk under the Glenfinnan Viaduct. In 2013, we took the Jacobite Steam Train from Fort William to Mallaig over this amazing structure so it only seemed fitting that we saw it from a different perspective.

As impressive as the viaduct is when you ride the train over it, it’s even more so from below.  The stone masons who built this huge structure were skilled to the “nth” degree.

However, as much as we were captivated by this area, we had to carry on to Inverness.

Our next stop en-route was the Commando Monument near Spean Bridge. This has been erected adjacent to the main A82 road to Inverness.

At this point, we knew we weren’t going to make our anticipated check-in time at Acorn House in Inverness so we called there and pushed our arrival time back to 17:00 and passed on the side trip out to the Witch’s Cauldron.

We made it to Acorn House well in advance of our revised time and were given a warm welcome.

Once settled in our lovely room, we set out in search of supper. I had seen Indian food on google maps and we found a wonderful place in the city, well withing walking distance of the Guest House.

The atmosphere at Rajah was excellent as was the food, service and price. Highly recommended place to go for an authentic meal.

Well fed and content, we made our way back to the guest house and settled in for the night.